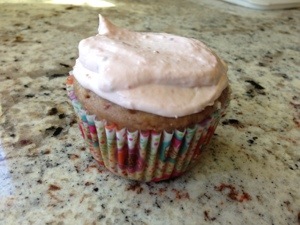 At the request of my youngest, I baked Strawberry Cupcakes for him to take to daycare. These are about as healthy as you can get, low fat, low sugar and most important tasty!

Preheat over to 350. Line muffin tin with cupcake liners.

Combine frosting ingredients in a food processor, process until combined and smooth. I only use about a 1/2 c sugar, add more to taste. 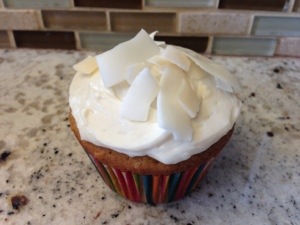 I love coconut and cupcakes! This recipe is adapted from a recipe on the William-Sonoma website. I replaced the sugar for coconut palm sugar and the butter with coconut palm oil to make these the ultimate coconuts cupcakes!

In a bowl, sift together the flour, baking powder and salt.

In another bowl, using a handheld mixer on medium-high speed, beat together the sugar and coconut oil until the mixture is light in texture, 2 to 3 minutes. Beat in the egg yolks, one at a time, then beat in the vanilla. Reduce the speed to low and add the flour mixture in 3 additions alternately with the coconut milk in 2 additions, beginning and ending with the flour mixture and scraping down the bowl as needed, beating just until smooth.

In another bowl, using the mixer on high speed, beat the egg whites until soft peaks form. Stir one-fourth of the whites into the batter to lighten it, then fold in the remaining whites, leaving some whites visible. Gently fold in the coconut flakes. Divide the batter evenly among the lined muffin cups, filling them about three-fourths full.

Bake until a toothpick inserted in the center of a cupcake comes out clean, about 20 minutes. Let cool for 5 minutes in the pan, then turn out of the pan onto a wire rack and let cool completely. Leave the oven on.

In a bowl, using the mixer on low speed, beat together the cream cheese, coconut oil and vanilla. Gradually beat in the confectioners’ sugar until the icing is smooth. Spread the frosting on the cooled cupcakes, dividing it equally. Sprinkle with the toasted coconut, then serve. 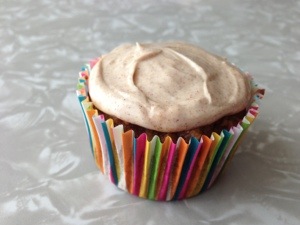 Nothing says fall like apple spiced cake cake with cinnamon cream cheese frosting! These are a healthy version. I swapped out melted butter for apple sauce and used coconut palm and day sugar. They taste just as good but with all the processed sugar and fat.

Fill each baking cup about 2/3 full and bake for 22-25 minutes or until a toothpick inserted in the center comes out clean. Allow to cool and frost.

Combine in a food processor and frost cupcakes. 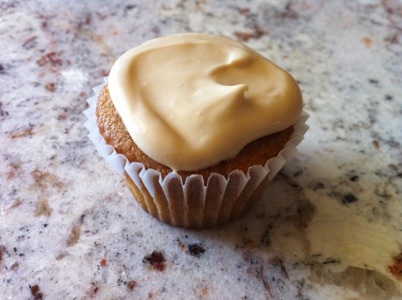 I love caramel and sometime I forgo low-fat and healthy for something not so healthy but super yummy!! I did use palm sugar in place of brown.

Divide into cupcake pan, filling about 2/3 way. Bake 20 minutes until toothpick comes out clean. Cool on a wire rack completely

In a heavy bottomed pan cook sugar over medium-high heat until it begins to melt around the edges, about 5 minutes. Stirring with a wooden spoon until melted about 3 minutes.

Carefully pour in cream and stir constantly until smooth. Stir in salt. Pour into a heat proof container and cool completely.

In a small food processor, combine cream cheese and caramel.

Ice cupcakes.
Keep in fridge and bring to room temp before eating. 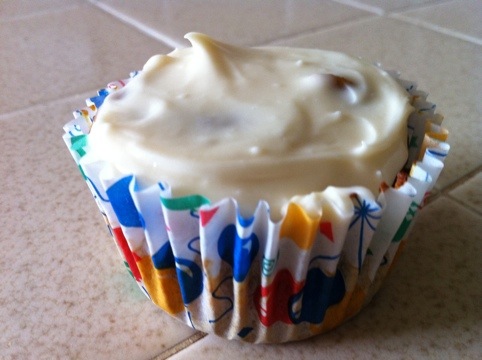 Nothing says fall like pumpkin pie spice!! So to celebrate fall I whipped up a batch of these yummy pumpkin cupcakes. The freeze great and then you can have cupcakes on demand. This recipe is adapted from Bon Appétit, Oct 2010. Personally I think my low fat & reduced sugar version of these cupcakes taste great.