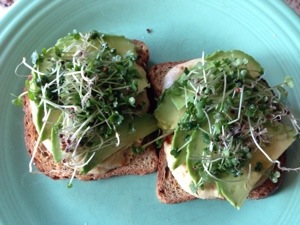 This is one of my favorite lunches – crunchy toast topped with creamy hummus and avocado with some crunchy sprouts on top. It’s quick and I usually have the ingredients on hand.

Spread hummus on bread, top with avocado and sprouts. 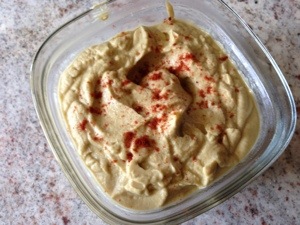 I love hummus – especially since I bought my Vitamix – it takes minutes to make a big vat of it! This week I was in the mood for something spicy – so I added some jalapeño and hot sauce and topped it with a little cayenne pepper – yum!!

In a blender add all ingredients and purée until smooth – add water as needed until it is nice and creamy.

Top with a little cayenne and serve. 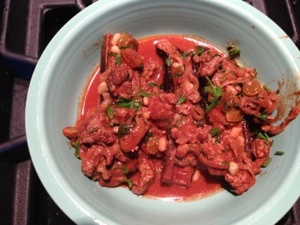 This recipe is adapted from Food & Wine magazine, I just made a few minor changes. The cinnamon is what makes if special.

Preheat oven to 425. Arrange eggplant in a baking dish, spray with olive oil, salt and pepper. Bake for 20 minutes until browned.

In a small bowl combine cinnamon, paprika and cumin.

In a large skillet, heat the oil, add onions and 1/2 the spice mixture, cover and cook for 7 minutes until soft. Add lamb and cook until cooked through, about 5 minutes. Stir in tomato paste, raisins, pine nuts and half the parsley, remove from heat.

Spoon lamb mixture into the eggplant and cinnamon stick to the pan. Mix 1 cup of water with the lemon and remaining spice mixture, pour over eggplant. Bake for 40 minutes covered with foil. Top with remaining parsley and serve. 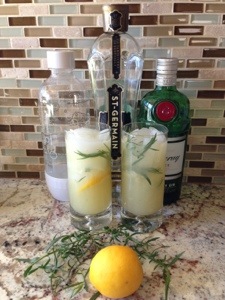 This recipe was inspired by Bon Appetite, I made a few changes to suit our tastes. This is the perfect cocktail for a hot summer day – the tarragon and Elder liquor are great together.

In a pitcher add tarragon, lemon slices, lemon juice and sugar – muddle the heck out of it. Add the gin and st germain, muddle more. Allow to seep for an hour or more, muddling when you think about it. Just before serving add the speaking water.

Serve over ice with tarragon and a few lemon slices.